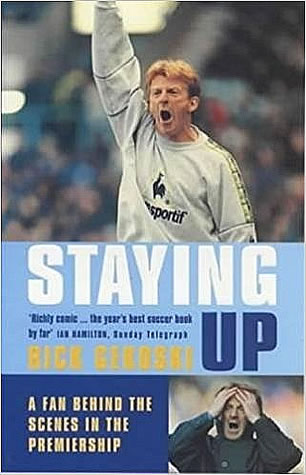 I am the only football fan who has written a book containing an inside account of a year in the life of a Premiership team. OK, it was only Coventry City, but the season was 1997/1998, and we finished solidly in the middle of the league, and got to the quarterfinals of the F.A. Cup. I had the decidedly mixed experience of being there every step of the way, and it was by no means a comfortable journey. Football people are uneasy in the company of outsiders, and the book is chronicle of their unease, and mine. The result is a sort of travel book, with balls: a foreigner goes to a strange land, is feared and mistrusted, learns new languages and viewpoints, and eventually finds a modicum of acceptance. Not an easy process, but fascinating.

After Staying Up was published, two responses stood out, and gave me the most satisfaction. The first was from the redoubtable poet and critic Ian Hamilton (himself the author of Gazza Agonistes, and a Spurs supporter) reviewing the book in The Sunday Telegraph. Staying Up, he wrote, actually told us things about football we hadn’t known, “was richly comic” and “the year’s best soccer book by far.”

I could hardly have imagined a more satisfactory response, but I got one, and it come, modestly enough, in a reader’s report on amazon.com. The writer didn’t give his name, (he called himself “A Customer”) and was clearly at the other end of the literary spectrum from Ian Hamilton. He was obviously a passionate City supporter, though. He was one of us: “Fantastic reading best book I have read. I bought this book the very first day it came out on sale and it took me 3 days to read. I thought the way the book was written and no holds barred with some of the stories which mentioning no names got offended by if it was about me I would have been honoured.”

Can’t ask more than that, though one of the football fanzines panned it, on the lines “middle class wanker wants football players to be interested in him, rather than the other way round, and spends his whole time describing how frustrating it is,” which seemed fair comment to me.

Some Reviews and Responses

‘The 1997/1998 season at Coventry City was told, in brilliant detail, by Rick Gekoski, a fan who ‘got lucky’ in his own words and spent the campaign up close and personal with the team, management and chairman Bryan Richardson. The result was Staying Up Read again on its own it is an uplifting story …’

‘A classic, some wonderful insights into the mind of Premiership Man.’ FOOTBALL 365

‘If I had known that you were going to write this sort of book I would never have allowed access to myself or the team. Having said that I think it’s one of the best books about football ever written. The closest anybody could get to what it’s really like.’ Gordon Strachan to the author.

Any cookies that may not be particularly necessary for the website to function and is used specifically to collect user personal data via analytics, ads, other embedded contents are termed as non-necessary cookies. It is mandatory to procure user consent prior to running these cookies on your website.